Located on a range of hills that form the western limits of Africa’s Great Rift Valley, the lodge offers spectacular views over the vastness of Africa.

165kms from Nairobi on tarmac roads, and then 21kms of all-weather road through the National Park. The flying time from Nairobi to the tarmac, Naishi airstrip is about 40 minutes. 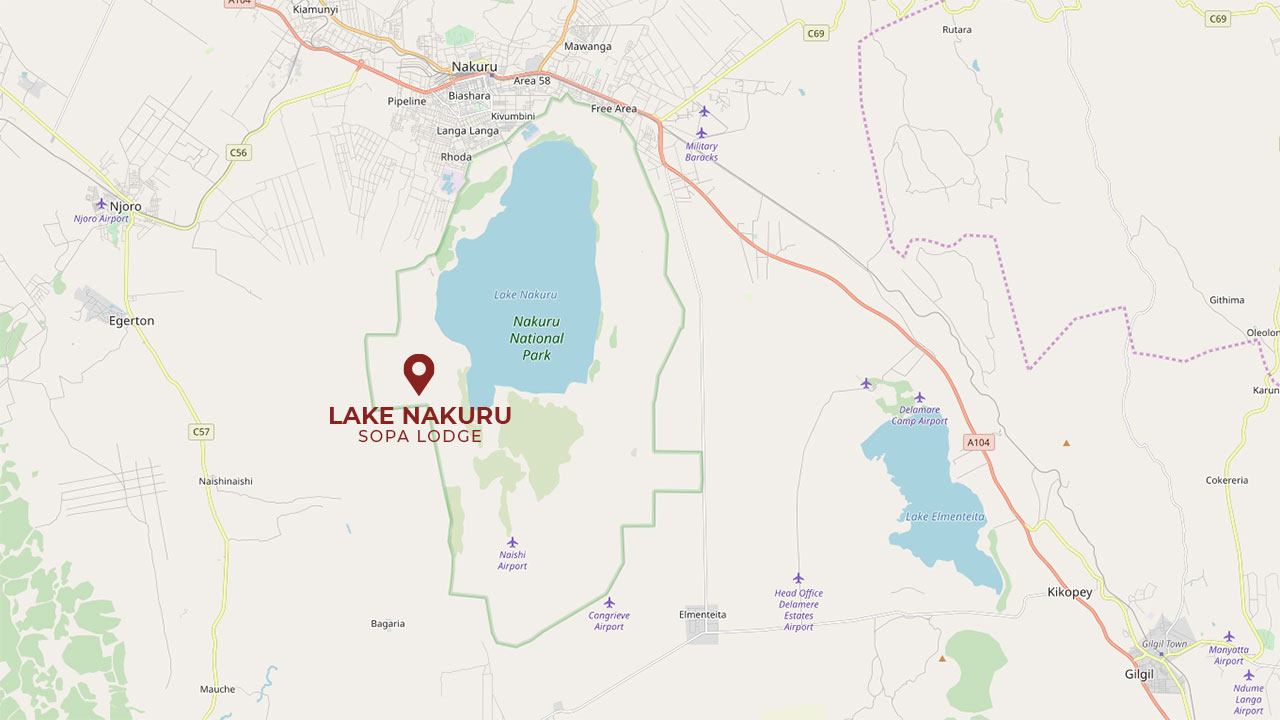 The park lies in Central Kenya, 140km north-west of Nairobi, in Nakuru district of the Rift Valley Province. The ecosystem comprises of the lake, surrounded by mainly wooded and bushy grasslands. The park supports a wide ecological diversity with Flamingos (Greater and Lesser) and other water birds being the major attractions of the area. The ecosystem provides for about 56 different species of mammals including the white rhino and buffaloes and a variety of terrestrial birds numbering nearly 450 species.

The vegetation is mainly wooded and bushy grassland with a wide ecological diversity and characteristic habitats that range from the lake waters to the escarpment and ridges.

The normally water-covered surface of the lake occupies about a third of the park. The lake water supports a dense bloom of the blue-green Cyanophyte Spirulina platensis from which it derives its colour and which is the major food source for the flamingo.

The lake is fringed by alkaline swamps with areas of sedge, Cyprus laevigatus and typha marsh along the river inflows and springs. The surrounding areas support a dry transitional savanna with lake margin grasslands of Sporobolus spicatus salt grass moving into grasslands of Hyparrhenia hirta and rhodes grass Chloris gayana in the lower areas.

Rocky hillsides on the Parks eastern perimeter are covered with Tarchonanthys scrub and a magnificent Euphobia candelabrum forest.

The park has a tarmac road connection with Nairobi, a distance of 156 km north west of Nairobi on the main A104 road. The most commonly used route into the park is via the main gate, 4 km from Nakuru Town Centre. It is also possible to enter the park from the main Nairobi Nakuru road at Lanet Gate. The Nderit Gate is used by people accessing the park from Masai Mara or Elementaita.

The park has an adequate and well serviced motorable roads that make most parts of the park accessible.

The park has three gates, Main Gate and Lanet Gate that link the park with the Nairobi-Nakuru highway and the less used Nderit Gate.